So I decided to set aside Mondays as my project posts. Seeing as I tend to do a lot of them. Lately they've been sewing projects and today was no different. This time I took on a project for Maddox. I had this fabric for what seems like forever so I thought I would finally put it to use before he grew out of it! Although I probably have enough for another project.

I found this pattern online and thought it sounded simple enough why not give it a go. 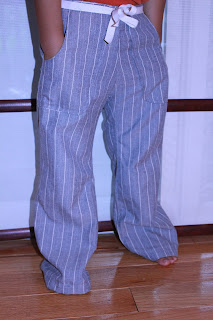 The pockets probably gave me the hardest time. Sounds ridiculous I know, but put of my was going, "I could so make internal pockets in a snap. Why am I making exposed pockets?" I know they started out the same size, but then I accidentally sewed them both the same way and then had to take the one apart and fix it. Ugh! Somehow in the process I had one pocket slightly bigger than the other. So then I had to somehow fix them the same size again. Let's just say that every time I do a project I learn something new which is probably why I keep sewing. It challenges me. Not because I have some sort of magical skill.


I changed the pattern in two areas. First? I only had 1/2 inch elastic and I was going to go out and get 1 inch so I adjusted the band size. Two? I added cotton ribbon to the front by sewing one edge at the seam and then again close to the middle. Repeated on both sides and tied in the middle. Still unsure if I will sew it in place so it doesn't come undone. I guess I will have to see how I like it. I also listened to the advice and made it extra long so that he could grow into it. 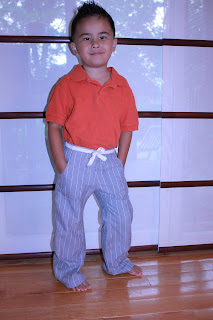 He loves them and says the are so comfy. Good thing he is so skinny because the pattern was perfect in the waist and I even cut it a 1/4 in. past the pattern.

Will definitely do this again I found this website where she made corduroys and added funky rocker pockets to the back. And they are green Maddox's favourite colour. I will have to keep an eye out for green fabric that I like.

Charity
I've been raised with the mentality that your experiences in life make you who you are. I have had many experiences in my life so far that have given me a lot of stories to tell as well as helped me to become the person I am today. Comfortable in my own skin and proud of the most important decision I ever made, becoming a mother. Family is everything. I want my kids to look at this and know that each day they are I am better for it. So this blog is a celebration of that as well as sharing some of the stories in my life past and present. Sometimes I am going to jump out of my comfort zone to share my life with you, but in those moments I think I see more beauty in my life. I hope you enjoy.

Our oldest. He has always been the quiet one. Since he was a baby he would just sit quietly and stare at people, things, anything really. We knew from the start he would be the brainiac and sure enough he is. Fast learner, great memory, problem solver, builder... I can't wait to see what is in his future.

Our princess. Since she was a baby we knew we were in trouble. She has always been a charismatic, outgoing, full of smiles, gorgeous charmer. She had our hearts from the moment we met her and captured everyone else's heart who has met her since. She loves to dance and be a little mommy to her baby brother. Loves being on stage. Oh what we have to look forward to when she becomes a teenager!! 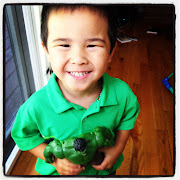 Our baby. Our little monkey. Our free spirit. So many names I could give him, but joy has to be at the top. He is our clown. He entertains us and makes us laugh. Even his temper tantrums are mostly entertaining. He has a way of getting what he wants with his polite manners and his big toothy grin. We love him for it!

This is the site you can't be without. She is fabulous and you should want to know her!